This exhibition acknowledges the growing success story that is Nordic Art. From the ever rising reputation of The Helsinki School, to established stars such as Olafur Eliasson and Eija Liisa Ahtila, Nordic Art is making its presence felt on an international scale. October 2006 saw the inauguration of Christies’ Nordic Art and Design sale. The first by an international auction house outside the Nordic countries, organiser Sophie Hawkins expects this year’s to include many more contemporary artists.

Elastic Residence is pleased to showcase the work of four emerging artists: Linda Persson, Sara Appelgren, Sara Ahde and Sofia Wilén.
The works presented engage with issues surrounding performances and their staging, layering everyday experience in both playful and unsettling ways; creating an ambiguous space through which they interrogate the relationship between perception, spectatorship and performer. A strong sense of setting permeates the exhibition, as the artists explore how environment enhances or impinges on a situation, character or mood.

Funded by East Midlands Arts Council, Linda Persson has spent this year as resident artist at Loughborough University, developing several performance based projects involving local people and surroundings. Encounter (2007) is the culmination of a project inspired by Gericault’s Raft of Medusa.The focal performer Keith Barlow is a teacher of physical theatre, training in the Martha Graham school of contemporary dance. Marooned upon a floating stage, the emphasized encounter between him and an audience of unsuspecting dogwalkers. With the material from her investigations, Linda creates composed environments incorporating sound, visuals and sculptural appropriations. In a collaboration with Paul Noble, the dawn chorus and canine calls have been sampled to produce a musical score that accentuates the choreography of the dance.

Sara Appelgren presents work from two ongoing photographic projects. Telling Stories (2006-) captures the stark contrasts of the scandic landscape; the dense pine forest, glistening snow and encompassing darkness. With a minimum of visual components, she achieves a maximum sense of expectation and narrative possibilities. Mingle (2006-) isolates the crowd from its context. What is the occasion? Are they an audience, the performers, or are we? Like other pieces in the show, the narrative is of our own devising, betraying the conditions of our engagement. – A photographic frieze, one can only surmise the dynamics of the group, however the possibilities seem endless and exciting.

Whilst Mingle fills us with the possibilities of social engagement, Sugar (2006) impresses upon us the difficulties. The three actors in Sara Ahde’s latest film are characterized by an inability to communicate or level of non-verbal communication. Her work exemplifies a directness and economy of speech she associates with Nordic culture. Sugar is an allegorical representation of a strained relationship from the artist’s personal history, employing friends and relatives as actors. In an odd blurring of the boundries between the real and fictitious, one encounters people acting discomfort, the discomfort of amateur actors in front of an obtrusive camera and the real life relationship tensions that also exist. The heavy atmosphere of Sugar is relieved somewhat by its unusual epilogue Sauna (2006), as the three players relax in true Scandinavian style, though the rolling camera is an ever present fourth.

Like Sara Ahde, Sofia Wilén brings her passion for photography to bear on her films. An emphasis on framing, making the videos as still as possible, with movement only occuring from factors environmental and unrehearsed, have all been key features in her work. Grustag (2007) plays with three dimensional objects turned into two dimensional images.The shadows of two figures cast on a hillside are animated more by the breeze than their physical gestures. The slight swaying of the camera seemingly also in tune with the wind. The work’s title refers to the landscape, describing gravel quarries found in a “rullstensås”; long hills comprised of stones, forged by the ice that covered northern Europe over ten thousand years ago.

Elastic Gallery is excited to be moving to a new site this summer. To celebrate the last show at 22 Parfett St, the end of Nordic Stories, 3 years and 21 successful shows, we are holding a party on June 7th. Please join us for an Absolute/Finlandia! 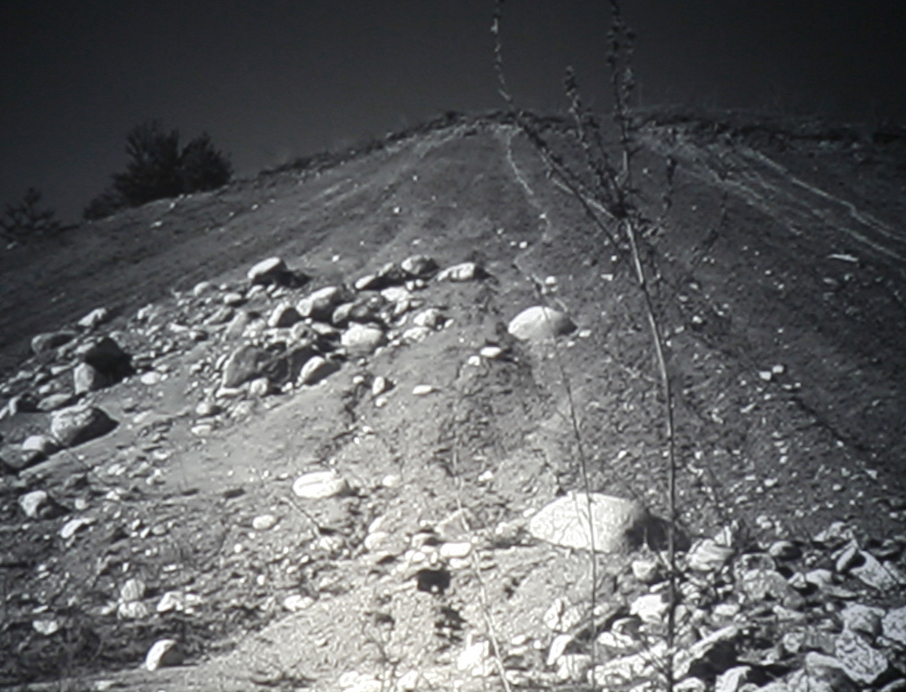