The Parlour Room-Keening After Things

Deej Fabyc works in live art, video, sculpture/installation, painting and photography. Her latest work at Elastic Residence is a performance installation spanning over three weekends. The Parlour Room-Keening After Things deals with many of the themes previously explored by the artist, most notably those of autobiography and death, and features the body laid out as though dead something that has appeared with regularity throughout her oeuvre.
Fabyc’s recent performances such as And She Watched and Pisstake have presented the body in a more clinical environment. In And She Watched a cast of the artist’s body was laid out on a steel slab and underwent a “pseudo-forensic” examination in a room with white walls while Pisstake, records the artist’s journey across London to St. Bartholomew’s Hospital, with two one-gallon containers of her urine. But Fabyc’s latest work brings the recurring subject of death and the body into a more private arena; that of the parlour, or front room of a house. In The Parlour Room- Keening After Things (2006), Fabyc thus moves away from the theme of “medical surveillance” and presents the body in the more personal domain of the home. As in The Parlour Room a Two Way Mirror Affair (1994), in which we encountered a body dressed in red and placed on a mortuary slab, we once again come across the laid out body in The Parlour Room- Keening After Things. But while the earlier work deliberately invoked both the funeral and the massage parlour, Fabyc’s latest work refers to the parlour as the guest room of the family home and in an environment reminiscent of a traditional wake, the artist explores the rituals around death the deceased, rituals that are fast disappearing as we become increasingly disassociated with death and dying.
“Part classical tableau, part personal pinboard, Fabyc’s semiotic surfeit is alternately public and private in its revelations”. (Gibson) The audience is invited into the parlour populated by a version of the artist, laid out as though dead, and two mannequins representing her parents when they were children. In the dialogue and interaction with her dead parents, the artist attempts to investigate her own history and to trace the family tree.
Having spent years in Sydney and now back in London Deej curates work at Elastic Residence in London and teaches at Newport School of Art in South Wales. She has presented work in exhibitions and performance at major galleries in Australia and Europe. She has recently exhibited at Castlefield gallery in Manchester and the Reina Sofia Museum in Madrid

Please Note on the opening day the artist will perform from 4-6 pm and then be available to sign copys of her recent monograph “Handle on Nowhere” to be officially launched at 6.30 pm

“Handle on Nowhere” available for only £5 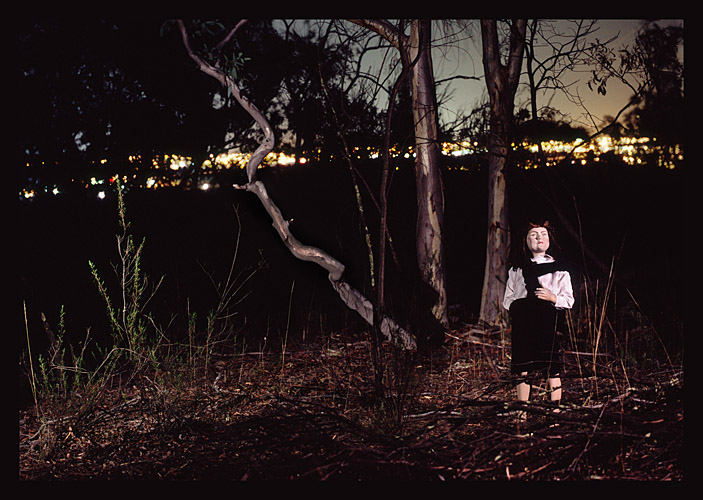