Andrew Hurle studied printmedia at the Canberra School of Art in the early 1980s, working with photocopiers and screened image reproduction techniques. He moved to Melbourne in 1989 to study at the Victorian College of the Arts and around this time began to use digital photocopiers and computers.
Andrew now lives and works in Sydney, exhibiting with the Darren Knight Gallery as well as smaller artist-run galleries in Sydney and Melbourne. He was a member of the Elastic artist-run gallery and recently co-edited the 180 page Elastic artists publication.
For the past decade his work has been concerned with economies of printed reproduction. His most recent exhibitions have investigated the relation between ornamentation and printed money, the materiality of digital pornography in print, and optical stereo lenticular imaging. Andrew Hurle currently lectures at Sydney College of the Arts in Digital Print and Studio Theory and also at the University of Technology, Sydney in the areas of computer typography and web design. 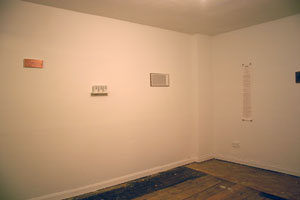