A survey of some recent International short film and video

Artists will be presenting talks during the exhibition ….

Rastko Novakovic with Steven Ball on the 31st of March at 3pm.

Reviews of cinematic history like to suggest a change in the role of film and of filmmakers. While film was once a tool used to strengthen dominant ideologies, it is now, it would seem, a weapon with which to attack them. This notion is easy to believe when we compare early propaganda films to contemporary overt virulent attacks on political and cultural systems by the likes of Michael Moore, Morgan Spurlock et al. So too, cinema and television have witnessed an increase in political drama and documentary, focussing on real life issues, corrupt regimes and the inner workings of political institutions. On viewing such films, we like to believe we are finally witnessing the truth and we are often quick to swallow the vague, rushed findings that are manipulated to create a coherent and convenient narrative that fits into a tight two-hour schedule suitable for cinema. And in this modern cinema, with popcorn and surround sound, politics can quickly become entertainment, a spectacle, something that we consume on a Friday night.
Clearly we must look elsewhere if we are to find in-depth, genuine and engaging political discourse in film; to independent productions, and to art galleries, where politics can be explored in more subtle and less sensational or narrative-driven terms.
The latest show at Elastic Residence explores the close relationship between film and politics and features works by Madeline Djerejian, Raimi Gbadamosi and Rastko Novakovic as well as a series of short films by emerging artists and filmmakers.
Madeline Djerejian’s video, The Last of Beirut, is a silent film which, through text and image, constructs a vision of displacement and loss on the eve of civil war in the Lebanon, 1975. Image and text are interwoven presenting a fragmentary account that resists narrative coherence and emphasizes the subjective and contradictory nature of memory. The exclusion of audio material forces the viewer to rely on text, and thus slows the process of viewing, creating a mood that is “the antithesis of spectacle”. 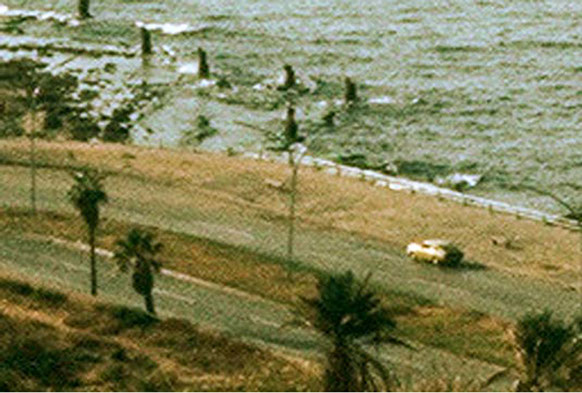 Meanwhile, Rastko Novakovic’s film, Sunday Afternoons in Majdanpek, takes us to Majdanpek, a devastated mining town in Eastern Serbia. The camera traces and retraces the same route, to and from the town’s cinema and each trip offers a new perspective, a different image of the route. Tri u dva ne ide attempts a cinematic reading of present day writing in movement and a reading of contemporary representations of Serbia. The accompanying sounds and voices, political slogans, prayers, songs, intermingle to form a muddled narrative, which, once again, resists coherence and invites us to question narrative voices. 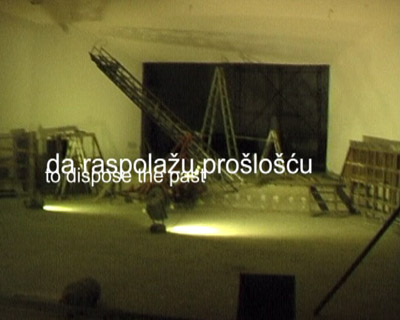 Raimi Gbadamosi’s work is concerned with the inter-relationship between race, power and language. His website, www.the-republic.net invites viewers to read dictionary style entries relating to the colours black, white, and yellow, and to decide which colour they identify with most. Members of the Republic are issued identity cards (“I am yellow” etc) and a copy of the constitution. Gbadamosi’s film,” Invasion”, asks us again to consider the colours of the human races, black, white and yellow. Blocks of these colours move slowly and hypnotically across the screen, changing form and increasing and diminishing in size. The overwhelming images force us to react subjectively to colour and to explore its connotations. 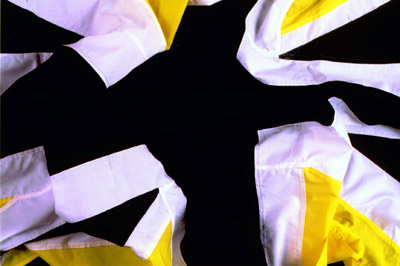